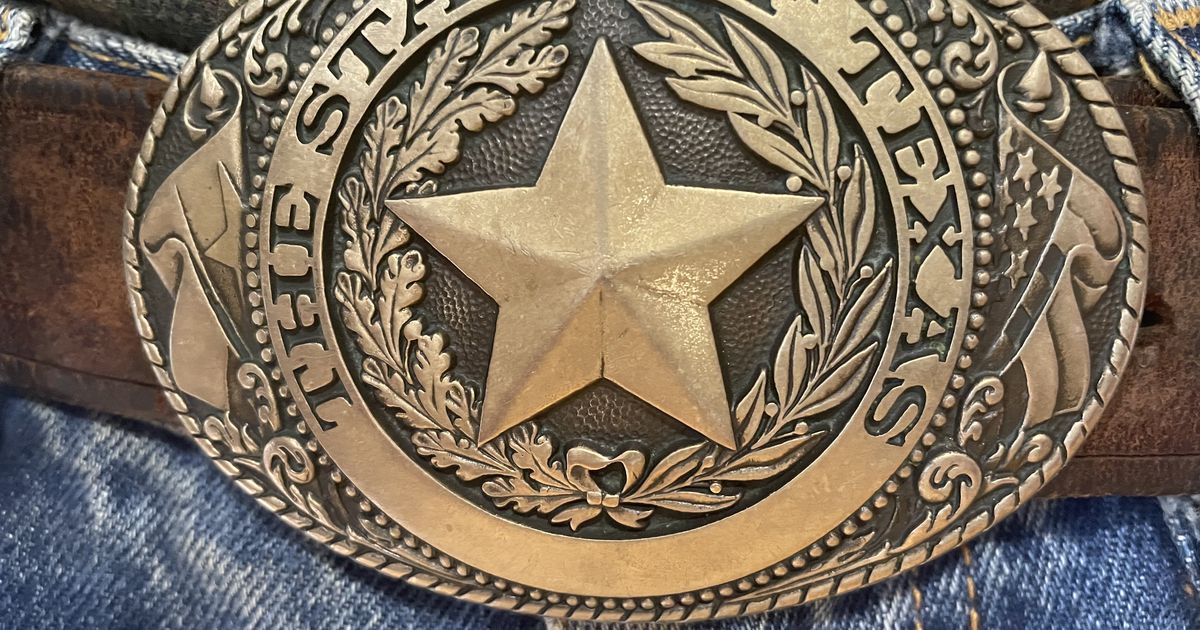 The belt I wear usually elicits an unpleasant reaction from people who see it. He has a large Lone Star brass belt buckle that sits in the center of my hips. I guess the reactions are justified. In New York, where I’ve lived for the past nine months, a string of conservative victories in Texas state politics has Gov. Greg Abbott on the minds of many I meet in a segment certainly limited of the New York intelligentsia. When I venture into these highly refined strata of society, the loop becomes a surprising, or menacing, or comical spectacle. I leave my shirt unstitched.

I’ve had this belt buckle since my maternal grandfather died in 2006. I was in fifth grade – a tough year because my grandfather and the family dog ​​died less than a month old. each other and, until then, I had not dealt with the loss associated with death. But there was a give and take: He left the loop for me in his will; his Rolex too, but which disappeared after his death.

This grandfather was a child of German immigrants who settled in Cincinnati. He, in turn, started his own family there, although they – my mother’s family – had moved to the Midwest since his career as a community college president sent him after the openings. As a young man, he worked at a donut shop, played sports in high school, and rode a 1930s hot rod. He had a complicated relationship with his father and quietly struggled with his approval. He was more american graffiti that lone dove.

I mention Ohio because the maternal side of the family is from the state and the family farm is in the southeastern part of Morgan County. The farmhouse is a 19th century remnant and, in its own way, the rubble of a collapsed American way of life that flourished long before urbanization and suburbanization took hold. The farm was originally purchased after the Civil War, by an ancestor who fought with the Union and used his muster money to purchase the land.

Like my heirloom belt buckle, I treasure a bittersweet memory of the farm. Long ago, on a summer afternoon, my grandfather and younger brother were planning to eat vanilla wafers together dipped in chocolate milk. Neither my brother nor I were over 5 at the time, but my grandfather specifically wanted to enjoy this meal with the family’s baby as a private bonding activity. When you’re a preschooler, the opportunity to eat vanilla wafers dipped in chocolate milk with your grandpa seems like pretty much the height of luxury, and so you can see why it was dreadful. that I am denied this pleasure. It was unfair, cruel even, and as they made their way to the back porch of my grandparents’ farmhouse, I tried to follow them, hoping my grandfather wouldn’t notice or would pity me poor; after all, I loved chocolate milk.

He was stern in his statement: I would not be included, and as if to make it unequivocally clear, the screen door was slammed shut in my face.

By wearing the buckle daily, I have the opportunity to confront the complexity of this memory and others like it, and by respecting what I have closest to a historical figure in my life, my own great -father, I am able to face a person I love as he was, and not as an immaculate, idealized, sanitized and harmless caricature of a man.

But I walked away from myself – all to say that my grandfather wasn’t the most Texas man you’ve ever met, but neither was I. It is quite simple to receive a birth in Texas; other than thinking of yourself as a Texan in the most colorful sense of the word.

Texas has rapidly modernized while retaining much of its historic residue. Any Texan with the patience to dwell on it will find within himself that amnesiac sense of a thing, free and vulgar, that had come before the great civilizing mission – a thing now lost in time, and in its place stands the unbridled race of high society. -mounts, software developers and trips to Target on Saturday mornings. A man from Dallas or Houston will have his pair of boots or his Lone Star belt buckle and, upon coming into contact with those nerve endings of his confiscated heritage, will feel that old compulsion rising within him, only wanting to drink alcohol. . , curse and conquer. But, let’s say it’s a Sunday, and in 20 minutes he has to leave for a brunch where his loved ones will take pictures of their mimosas to share on social media; in such a case, his memory will quickly forget, replaced by an affinity for Benedict eggs.

Even with the loop and with the feeling of something lost, I never really felt like a Texan. I watched the Disney Channel too much as a kid and now I’m hopelessly modern. Even so, I must cherish and honor my grandfather’s memory. In doing so, I perpetually risk getting caught by a real country boy, someone whose daddy’s daddy could have been a good old boy. From a single glance, he would deduce that I “put on” and that I am not the mark of a man authorized to wear a belt like this. There would be no point in trying to explain that my Ohio-born German immigrant grandfather, donut maker and community college president, bequeathed the amulet to me.

The irony is that I was mistaken for such a guy. Last summer I was in Austin and made the mistake of walking around with my shirt tucked in and my belt exposed. After a day at work, I visited a bartender friend. One of his co-workers, on learning that I had just come from work, scoffed at whether I worked on a farm. This made the rest of the staff laugh, who laughingly pushed the state one step further towards its cosmopolitan conclusion.

Is the buckle proof of my Texan good faith or is it just a remnant of a childhood fantasy? Does my insistence on wearing it mean I’m staying true to my heritage, or just pretending to be something I’m not? It’s a tension that a lot of Texans feel, I believe — stuck somewhere between cowboy lore and Wendy’s drive-in.

The challenge is to find a way to balance the invisible qualities of oneself with one’s own appearance in the eyes of others. Because of how easily we get used to who we think we are, we often forget that each person we meet forms their own unique impression of us as a person based on what we give them. But, unlike those brief impressions made on strangers that we may or may not let affect us, the belt buckle is an ever-present source of sentimental value in my life, pointing to a now-dead man who is partly responsible for all good things. . in my life because he gave it to me. It’s worth appreciating, and it’s my fault that I didn’t, if I had the chance, though strangers may be appalled. Not appreciating what I have received is unforgivable if my own vanity is the thing that separates me from the meaning of my life. As with the belt, so have all the other meaningful things I inherited.

William Jones is originally from Dallas and is currently pursuing a master’s degree in creative nonfiction at Columbia University in New York. This essay is an excerpt from his thesis.