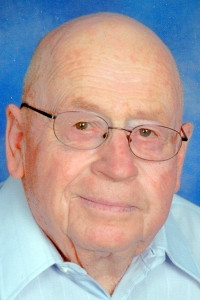 Ralph Verlin Harvey, 88, dropped out of his long fight Friday, May 13, 2022, at Brookings Hospital with his family by his side.
Services will be held Friday, May 20 at 10:30 a.m. at Rude Funeral Home, Brookings, SD. The family will arrange visitation from 9 a.m. until service time. Burial will be in Greenwood Cemetery. Rude’s Funeral Home will livestream the funeral service on the Rude’s Funeral Home Facebook page.
Ralph was born on August 1, 1933 to LeRoy and Thelma Harvey in DeSmet, SD. He was the youngest of 3 sons. He started and ended his professional career doing what he loved the most, agriculture. He often said that he would always like to work the land if he could. On June 26, 1955, he married the love of his life, Dorothy Bebensee, at his family farm outside Elkton. Together they had four children. It was for Dorothy that he fought his fight for so long.
Although Ralph worked hard, he also knew how to enjoy life. He played softball, was part of a stock car racing team, he covered many miles on snowmobiles and motorcycles. In 2009, Ralph and Dorothy achieved a lifelong dream of owning their first home.
Ralph has often told people that this is where he wants his health issues to end and not in assisted living. Over the years his hobbies have turned to playing golf, watching golf and talking about golf. He, too, in recent years has talked a lot about going to South Florida and all the things they did there. He also enjoyed fishing and camping at Mobridge each summer.
He loved historical things and often talked about the places he visited. He was an avid reader and always had a book by his side. Ralph’s infectious laugh made the others laugh until they cried although he couldn’t laugh much longer due to his breathing. Although he was a calm man, he could hold a conversation with anyone. Last year’s family reunion brought all his sons home. Then he said how happy he was to see them all so well.
As his health deteriorated, he would often tell his niece and the nurses at the hospital and clinic how his daughter Linda had really stepped in and helped them in so many ways.
His visits brought him great joy. Once a week, Ralph and Dorothy took part in a beer test at their house with their niece Sheri Bosch. He always greeted visitors from his chair with a wave of his hand in the air and a big “Hey” and his crooked smile. A great conversation would ensue. It didn’t matter how long the tour was, he was just glad you stopped by.
Ralph is survived by his wife of 66 years, three sons, Doug (Mariah) of Blountville, TN, Mickey (Tandy) of Casper, WY, Randy of Hulett, WY and Linda (Randy) Nelson of White, SD; six grandchildren, 11 great-grandchildren and one great-great-grandchild. in-laws; Martin and Barbara Bosch, George Buchenau, Art and Marjorie VanderWaal, and Roy and Jessie Bebensee, Jr, and Myrtle Harvey. Nieces and nephews and a very special niece Sheri Bosch.
He was predeceased by his parents, his brothers Gale and David and his two sisters-in-law.
The family would like to thank Brookings Health System for their excellent care during all of Ralph’s hospital stays and for their excellent assistance on the day of his death.
They would also like to thank the Brookings Ambulance Service, Brookings Police Department and United Living Community staff. Also Susie, their very special neighbor who watches over them when the family was not there.
Condolences can be sent to the family via www.rudesfuneralhome.com.