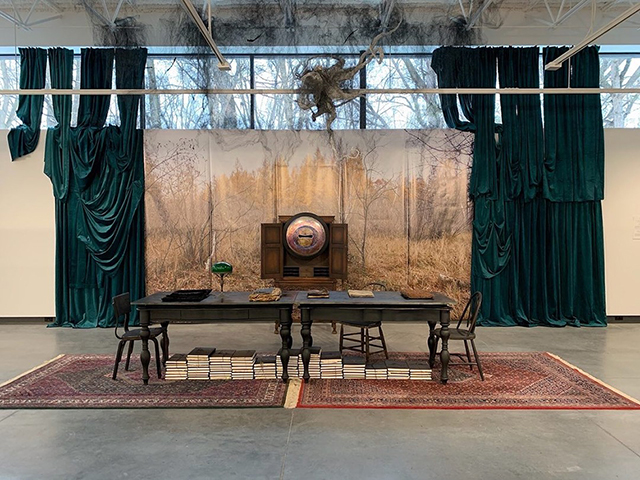 Choice of the weekend: kites, contemporary poetry and “La Bohème” by Latté Da

Scientists are still studying how the The COVID-19 pandemic has shaped our dreams, and this is probably something that will never be fully understood. Still, just because you don’t understand something doesn’t mean it’s not fun sometimes to relish exploring it. Tonight, White Bear Center for the Arts welcomes two artists exploring the subject in their work, in an exhibition that lasts another month. On top of that, here are some other ideas to get you out into the community – indoors, outdoors or via the internet as we will brave in January.

The gap between the worlds

Rebecca Krinke takes advantage of the windows of the White Bear Center for the Arts for her eerie octopus sculpture, part of a new installation that buzzes with dreams and evokes a sense of Victorian-era spiritualism. She exhibits her work alongside Amy Ballinger, a surrealist photographer whose work touches on the macabre. Audio accompaniment by artist Lauren Arndt, with vocals and music by Hannah Morton of Kitchen Congregation gives you an added sensory experience as you experience the artwork. Opening reception is 3:30-7:30 p.m. Thursday, January 20 (free, registration required); the audio walk event takes place from 6:30 p.m. to 8:30 p.m. on Thursday, February 10 (free, registration required); and the exhibition runs until February 17. More information here.

In 1996, 100 years after composer Giacomo Puccini and librettists Luigi Illica and Giuseppe Giacosa wrote “La Bohéme”, the dramatic opera about a group of performers in Paris, Jonathan Larson updated the story as form of a rock opera. He set it up in the East Village during the AIDS crisis, and the musical was a smash hit. Over the years, however, “Rent”‘s popularity has waned. Perhaps because it was so much a product of its particular moment in history, it doesn’t resonate as much with audiences in the 21st century. “The thing is, ‘Rent‘ didn’t age well because Larson wrote a musical that was entirely of its time,” Caroline Framke wrote in Vox in 2016. “Thinking back to ‘Rent’ today, after 20 years of pop culture progression, is a bit like listening to music on a cassette tape. Why revisit an outdated format now that we have MP3s and streaming?

Theater Latté Da’s production of “La Bohème,” first staged in 2005, nine years after “Rent” became a runaway sensation on Broadway, doesn’t have that problem. They changed the time period, yes, but instead of putting their version in the present, the company sets the story in Paris during the Nazi occupation. First produced at Loring Bar, artistic director Peter Rothstein’s version retains Puccini’s original music, sung in Italian with subtitles, but with a simplified selection of instruments. Pamela Espeland had a great interview with Rothstein in 2020, just before the Latté Da Theater resumed production. You can read part of the history of the production and its origin.

Unfortunately, it was canceled during the first wave of the pandemic. But this week, the production is back in action. It opened Wednesday and until Sunday, February 27 at the Ritz Theater ($35 and up). More information here.

The article continues after the ad

Make the most of your Art Shanty Projects experience by attending this weekend, when you can also experience the Lake Harriet Kite Festival. Bundle up and enjoy the beautiful dance of kites in the sky, and while you’re there, explore the weird and wonderful world of artist-designed art songs. You can experience both from 12 p.m. to 4 p.m. on Saturday, January 22 at Lake Harriet (free). More information here.

No, Hair + Nails is not a hair salon. It’s an art gallery run by self-taught visual artist, gallerist and musician Ryan Fontaine and dance designer Kristin Van Loon, known for her work with the dance duo Hijack. The gallery often uses guest artists, but also presents Fontaine’s work on occasion, often in collaboration with another artist. The last time her work took up the entirety of Hair + Nails was at the first-ever exhibition in 2016. This week, a solo exhibition of Fontaine’s art, “A Pale Simple Light,” reflects Fontaine’s experiences with the building since he and Van Loon began exploiting the space. Plants are juxtaposed with architectural elements as well as video and light sources in a meditation on unsustainable systems. The opening reception will take place on Saturday, January 22 from 7-10 p.m. at the Hair + Nails Gallery, and the exhibition will run through February 27. More information here.

The article continues after the ad

Page Burkhum and Jack Torrey brothers’ duo, The Cactus Blossoms, have a country sound with a touch of pop and folk. They have appeared once on David Lynch’s Twin Peaks and are currently in residence at the Turf Club ahead of the release of their new album, “One Day”, which will be released on February 11. You can see them with Geoffrey Lamar Wilson at 7:30 p.m. (6:30 p.m. doors) on Monday, Jan. 24 at the Turf Club, or when they last performed with Kansas Plates on Jan. 31 ($20-25). More information here.