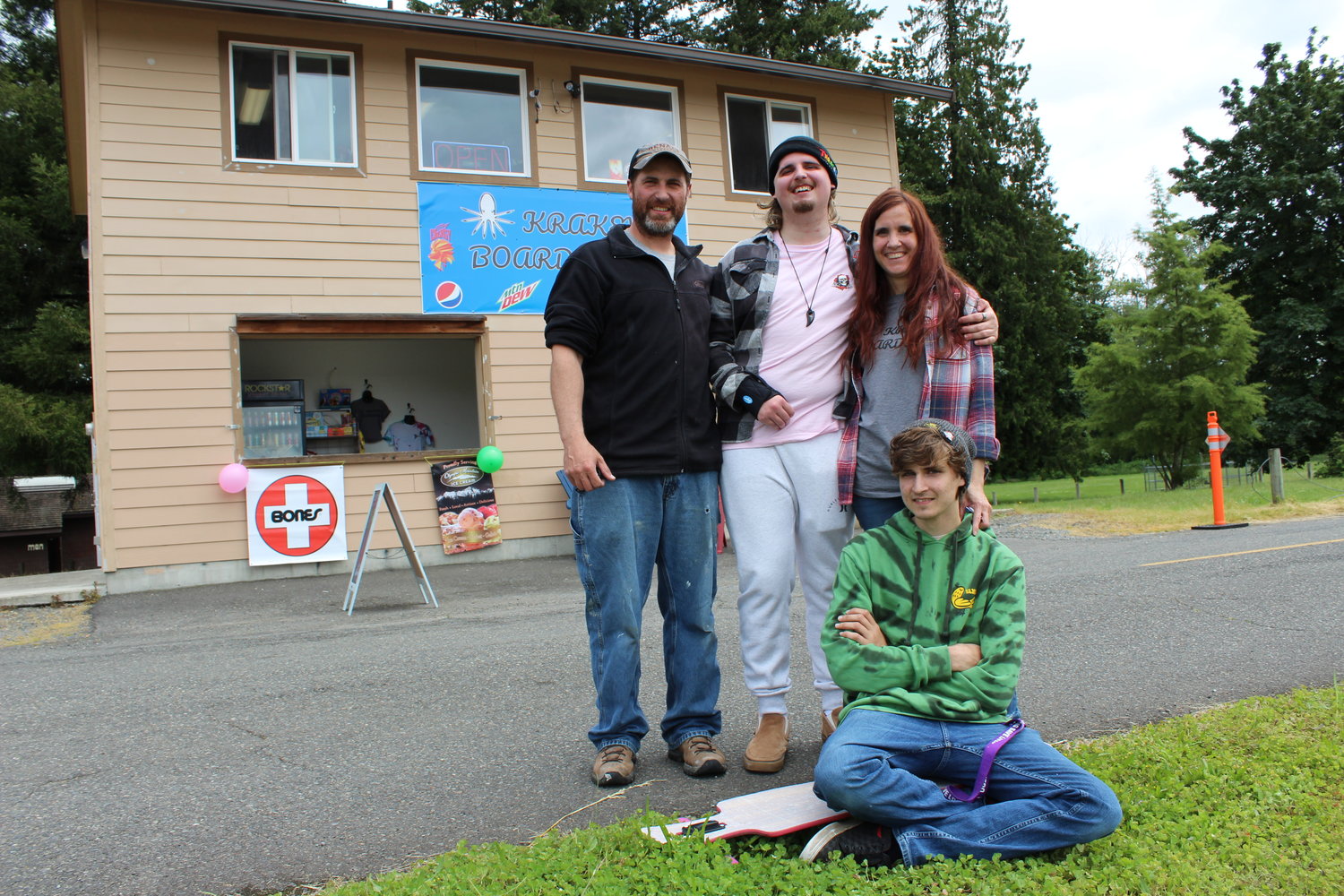 Despite setbacks, dreams have come true: Family helps man fulfill his wish to open a skate shop after brain injury

By Carrina Stanton / For the Chronicle

Hearing Braden Allee say it, the first time he stepped on a longboard, he knew it was the sport for him.

A few years later, a devastating longboarding accident nearly cost him his life. Still, her mom, Bonnie Allee, recalled her first two goals for her physical therapist: raising her right arm and getting back on her plank.

“I thought I wasn’t even going to be able to board again, that was my main priority,” Braden said.

Three years after that life-changing accident, 22-year-old Braden is still living his passion for the sport by opening, with the help of his family, the Kraken Board Shop and concession stand at the Rob Fuller Twin City Skate Park in Centralia. Located at Centralia’s Rotary Riverside Park, the location of the skate shop has been vacant since it was built around 2005 or 2006. Local skaters say the new shop and the Allee family’s work at the skate park are welcome.

“It’s all for children and for adults. It’s fun for all ages,” skate park regular Ray Arellanes said of the value of the local skate park. “And it’s phenomenal to have a local skate shop because the nearest skate shop is up north – Olympia, Seattle, Tacoma.”

Kraken Board Shop was started as an online store by Braden in 2018 after getting involved in the sport and the longboard community. But in May 2019, just a month before Braden graduated from high school, he was injured in a longboard accident on Centralia Alpha Road near the Allee house. He went out that morning to make a “hill bomb,” one of many longboarding techniques that involves going downhill really fast. Braden’s brother Bryce, now 20, was following Braden in his car, a downhill protocol (also sometimes called DH) that longboarders use both for safety, to time their speed and sometimes to film their descent . In this case, the family is grateful the brothers didn’t film because the speed caused Braden to wobble and he fell off the board.

“They said it was like a motorcycle accident because he was going so fast,” Bonnie recalled.

Bryce was able to call for help immediately and Braden was first taken to Providence Centralia Hospital where he was later flown by helicopter to Providence St. Peter in Olympia. Bonnie explained that he wasn’t sent to a bigger trauma hospital in Seattle because his doctors thought he might not survive a longer flight.

“It went really quickly from thinking he might have broken ribs and maybe a concussion to, ‘Oh my God, that’s really bad,'” Bonnie recalled.

Braden underwent three-hour brain surgery, after which he had only a 10% chance of waking up. He spent 13 days in a coma, then a month in total at St. Peter’s, and then several more weeks at Seattle Children’s Hospital in Seattle. Later, he underwent another surgery and two more months in hospital. While Braden steadily improved, his doctors often warned the family that there was so much uncertainty about his recovery.

“With brain damage, you take it minute by minute, breath by breath,” Bonnie said.

Braden wore a helmet, which he always insisted on, but it was meant for skydiving rather than downhill longboarding. Still, the family credits the helmet with Braden’s survival, and they have worked in the years since the accident to raise awareness of the importance of helmets. Bonnie also pointed out that Bryce’s presence during the accident and his quick thinking was another miracle that day as well.

“It saved his life, Bryce and the helmet,” Bonnie said.

Braden will still live with brain damage and suffer lasting physical effects from the accident, including diminished motor function on his right side. After his injury, his father, James Allee, took over running Kraken Board Shop with the goal of keeping the business going to provide employment and long-term income for Braden. Neither Bonnie nor James had skateboarding experience before their sons got involved in the sport, but they said they were both invested in supporting them both in any passion.

Earlier this year, James and Braden started looking for a physical location for the business when Arellanes suggested they check out the skate shop location at Rob Fuller Twin City Skate Park. The skate park was run by the Twin Cities Rotary and the City of Centralia and officially opened to the public in 2004. The two-story building across from the skate park was to house the nonprofit Skate Key, which aimed to offer a skate shop, lounge and changing rooms for skaters, but it was never able to open.

In April, the Allees signed a $100-per-month lease with the City of Centralia, which owns the park and facilities, to house a concession stand in the lower section and the Kraken Skate Shop on the top floor. Both have been unofficially open on weekends for about a month, but have their official grand opening this Saturday, June 18 at noon. After this date, the shop and the concession stand will be open from Wednesday to Sunday.

The lease agreement also requires Les Allées to perform general maintenance of the skate park property. On a recent Saturday, Braden picked up litter in the park while James added a fresh coat of paint to some of the skate ramps. One of Braden’s long-term goals for the company is to eventually raise funds and labor to replace the current ramps, which are made from wooden frames covered in a plastic material called Skatelite, by concrete ramps better adapted and safer for skaters.

“My main goal for the store is to have it here so that we have a place for the longboarder and skateboarder community,” Braden said.

Another goal for Braden is to get back on his board. It is also a work in progress with his physiotherapist. Using a tool called Braapstik, a land paddle designed to mimic those used by stand-up paddleboarders, Braden can now ride his longboard again, but no longer on the big hills. Braden is now participating in another longboard technique called long distance thrust. His new passion for longboarding focuses more on getting from point A to point B rather than breakneck speeds.