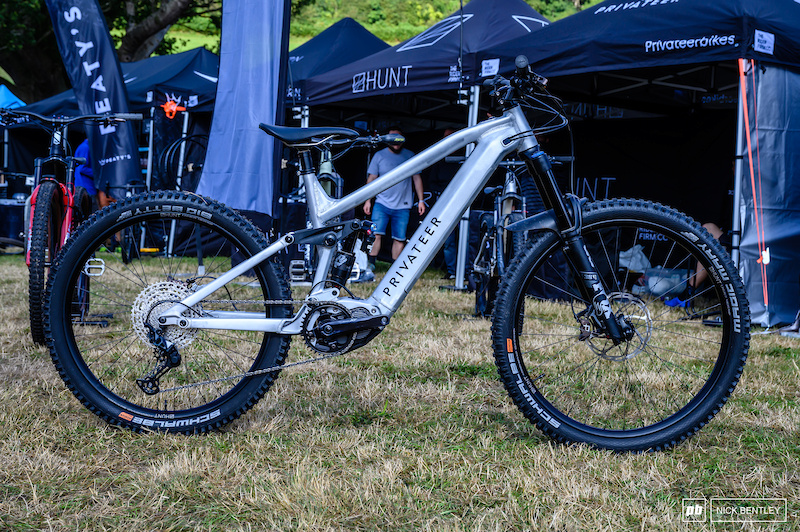 Interview: The evolution of the Privateer E161 eVTT

At the 2021 Malverns Classic, we spotted Privateer’s new electric bike. The British brand of pragmatic bikes from the same people behind the Hunt wheels, they have already brought the successful 141 trail bike and the 161 enduro bike to the market at a great price. So when I noticed these guys had an electric bike in the works, I had to see it for myself. For a bit more information, there have been footage of the E161 floating around on social media, piloted by Privateer’s EWS pilot Matt Stuttard. These were the first generation of bikes with 29-inch front and rear wheels, essentially a 161 with a Shimano motor and a bigger down tube containing the battery. That was exactly a year ago, things have since changed, so we checked with Privateers Sam Meegan to find out what changed with the E161 and when it will likely be available.

So we prepared it for the launch of Shimano EP8 last September. We started to ride it, it wasn’t quite right. Then at Christmas we kept riding and made the pretty tough decision to go, no something’s wrong here we have to change that. Then we hit the COVID peak with some crazy supply chain issues, hence the reason it’s still somewhat unfinished, but it’s very close to the finished bike.

So what have you changed from the first version?

We changed it to a mule setup and the 27.5 “wheel at the rear changed it a bit. Then we tweaked the suspension kinematics slightly and just tidied up a few small pieces of cable routing. The other big change was to change the helmet from the 1.8 “. We thought the 1.8 “headset was going to be very important with e-bikes, but that didn’t really take off, so we went back to the standard 1.5” tapered head tube.

You went from 29 to mule. Was it just a sensation while you were riding it?

Yeah, it was just with the rear wheel of the 29er that we could only bring it to 460mm chainstay. We try to make the shrouds proportionate by size so that everyone can ride with the same kind of feel. The two smaller sizes would have to be 460mm chainstays, so that wasn’t exactly great. We were trying to ride it and it wasn’t maneuverable because of the front end and it wasn’t particularly fun to ride. We just struggled to make it as handy as we wanted it to be. We went down to the rear of the mule which now allows us to switch to 445mm long chainstays in the smaller model. It just makes it more nimble and with the extra weight you have from the battery and motor, you don’t need the stability that long chainstays provide, so bringing it back actually makes it look more like the standard 161. .

Have you made a bike that looks like your 161 enduro bike but with a motor in it?

We have already mentioned it a lot, how important was Matt Stuttard in the development of this bike?

Matt was crucial for the development. He rode a huge amount of miles in this bike and when we told him we might have to take it back to exchange it for a new frame he was like “How long will I be without my bike? electric ?! ” So yeah, he loves it, to say the least.

So much more of the same from Privateer, building kit wise, still at a good price?

We are hopefully aiming for a price tag of around Â£ 5,500 to Â£ 5,700. We have a very similar build kit to the Shimano 161 which is a mix of XT and SLX. We use the XT shifter instead of the SLX shifter because the XT shifter gives it the nice shifting feel and the multi-click function, then the full SLX for things that are almost consumable to fine regards, like the mech and the cassette. We went with the Hayes Dominion A4 brakes which we just got a big fan of, lots of power, lots of modulation and it’s going to have big rotors on it. For the E-enduro wheelset this is a new, slightly wider wheelset, we are going for a new rim which we are in the process of developing to be similar to the current B2 wide enduro wheelset. . It will have the E-enduro hubs which are really big, beefy, steel axles and steel freehubs and the spokes are also a bit thicker and are still triple butted but just a thicker gauge so overall. built for durability.

What’s important with Privateer is that it’s about durability and when the bike takes a beating it keeps coming back for more. Is it more the same here?

Absolutely, every part we tried to put on it was something we would choose over other parts, for example we went with the Fox 38 performance Elite rather than the factory version as it effectively does the job. same as the factory. I don’t have the Kashima coating. We use a OneUp dropper seat post because it runs all the time and you can adjust the stroke, it has the shortest stack height and is simple to maintain. It’s just about trying to get the right bits. Then the other elements such as the rod, etc. are kind of personal preference. We have used our own brand items and try to keep up with the priorities, for example if you get the right tires, brakes and suspensions you have a set base and everything else can be swapped out and changed as you like. The tires will be Maxxis rather than Schwalbe, but there will be Maxxis Assegai up front with a DHR 2 rear both in the drop box, which comes standard.

What about the motor – which motor and which battery are you using?

Shimano EP8 motor with 630 watt battery. We worked on a custom bash guard on the E161. We’ve found that most bash guards are plastic which is good if you just slide over something, but if it gets impacted it doesn’t work so well. Matt made one out of sheet metal just bolted to the bottom, which worked fine, but we thought we could do something a little more appealing, so Dan, our engineer, whipped this one up and it’s pretty good.

I know it’s hard to say with all the supply chain issues, but when do you think it will launch?

So how do you deal with supply chain issues? Obviously you are not a massive company, you are not one of the big brands, are you having any problems with that?

It was hard, really hard. I’m just trying to order stuff. We started Privateer just as COVID really kicked off and it’s been kind of like a catch-up since. We were trying to be reasonable with the specs, picking the right specs, but sometimes the cassette can be out of stock for a year or two, so you kind of have to swap and change, which we try to keep consistent as well. as possible. But sometimes the bikes had to change a few bits and pieces just to get it out. We always opt for equivalent or better specifications. But it was really hard. It also slows down development a lot; for example, this bike should be out now. It should be available in the market because normally you get samples in a couple of months and it takes a year to get the samples through the door, go back and get all the things you need to build it. Many of these parts are from the original sample because you cannot get another to replace it. The development of shock was also difficult. Trying to adjust the shocks for the bike, try it out and then say oh no it’s not quite true, can we get this one instead, and everyone is just busy. It slows everything down, not just the sales of new bikes, but the development of things to come because we can’t get a product fast enough to develop and test it.

Okay, so that the Fox X2 sits right in the middle of the suspension, is it tailor-made for you?

Yeah, we’ve worked pretty closely with Fox on different shock tunes and stuff. So yeah, this one is the one they sent us based on our cutscene. Now we’re going to be doing some more riding over the next few weeks and months and make sure it should be that way.

What’s the next step for the bike?

So we’ll be putting it to the test soon because this bike hasn’t been ridden yet – it was built on Wednesday night. The final sample arrived on Wednesday, right after lunch, then we had to hurry to build it as we left Thursday morning. So more driving and testing.