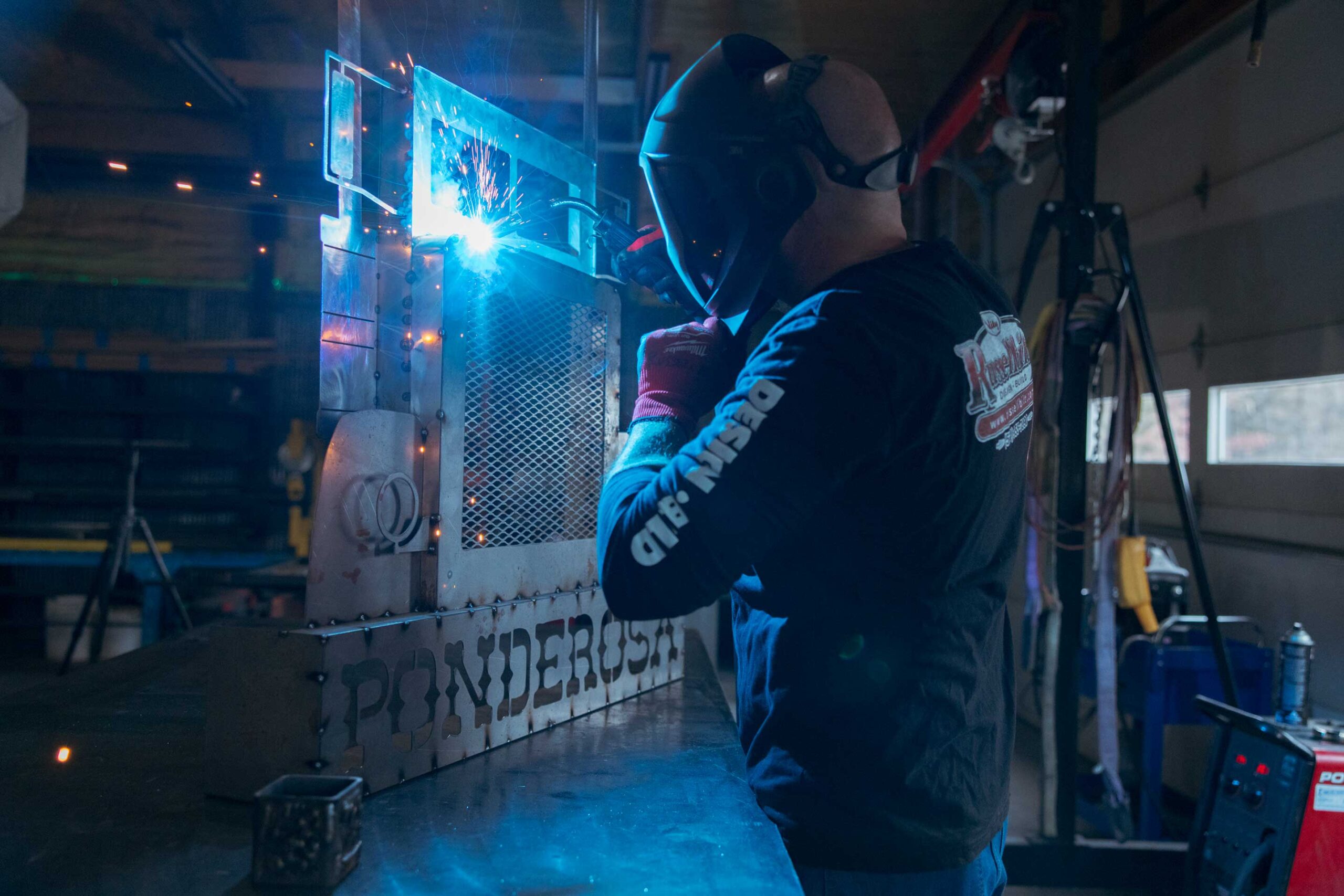 It all started with a spark

Emmett Russell leaves his mark in a city dear to his heart.

Some might say he was lucky. Or that he was in the right place at the right time, that he connected with the right people, that he had the right cards.

But Emmett Russell looks like he’s worked for everything he’s earned in his career as a functional artist, and he’s done everything for his family – son Ethan, 19, daughter Emma, ​​21, his stepson Sam, 31, and his wife Nancy, who he calls his rock.

“I think that goes hand in hand with putting your head down, doing a good job, and being a good person,” Emmett says. “I think you have to do all of those things for that success to come.”

Emmett, the owner of Russellbilt, masterfully transforms metal and wood into custom furniture, clocks, signage, stairs, railings, range hoods and awnings. Through collaborations with Aarow Building, Anderson Homes, and other leading Columbia homebuilders, his custom work can be found in more than 100 area homes, while his furniture and signage enhance businesses and restaurants like Fretboard Coffee, Barred Owl Butcher & Table, and Silver Ball.

“I can walk into a house where a builder wants a staircase and I can see it,” Emmett says. “When I’m done with a room, it looks just like I visualized it. For signage, I take into consideration where it goes, the vibe of their space, and the type of business they have. It’s the same with furniture, I consider the type of space they build – contemporary, modern, rustic – and I can imagine what works in that space.

Although Emmett says he was always artistic and often spent time drawing and painting as a child, his full-time work was primarily in fabrication and assembly, trailer welding and bespoke machinery and the construction of motorhomes. He first learned to weld on the job when a colleague was fired and he volunteered to learn the trade. With his manufacturing background, Emmett built many great projects, learning as much as he could from drafters and other welders and fabricators.

“I didn’t know it then, but I told my wife when I was 24 that I just wanted to build some cool stuff and sell it,” Emmett says.

Although he has found success as a working artist, he says it only comes from his dedication and restless mentality. After working tirelessly to hone his skills, the day Emmett’s art installation entered the Gateway Plaza at the corner of Providence and Broadway was a high point in his career as a professional artist. Personally, the opportunity to create a piece for such an important place in the city was particularly symbolic for him.

“To build something and put it in the middle of Columbia, and leave my mark, that’s a great opportunity,” Emmett says. “It’s almost like my time in Colombia has come full circle, and that means a lot to me. More than most people know.

Emmett’s son, Ethan, who was born with autism, is the reason he visits his 4,000 square foot store just steps from his front door every day. When Ethan was born, Emmett and Nancy lived in Iowa, but the couple quickly found that locating services for Ethan was a challenge. Emmett says he started an online search for cities with more robust services, and they quickly identified Columbia as the favorite. The Russell family moved in 2009.

“With the family in St. Louis, we felt comfortable moving to Columbia,” he says. “In the midst of planning the move, we also found out that Ethan needed a kidney transplant, so when we moved to Columbia, he got his transplant, we were getting great help with his autism, and he there was a great job for my wife at the University.”

With the move to Columbia, Emmett launched Russellbilt first. At the time, Russellbilt was a home improvement company. At night, Emmett says, he spent hours in a small one-car garage, where he began creating custom furniture. Although his skills were not quite up to par yet, he continued to practice and hone them with each project.

In the years following their move to Columbia, Emma also had a kidney transplant and Ethan had a second kidney transplant, both at MU Women’s and Children’s Hospital. As Ethan got older, it became increasingly clear that Ethan would need lifelong care, and the Russell family made a commitment to provide that care in their home.

“The goal has always been for me to work in my own store and be on our property, so if I have to close the store doors and be with [Ethan], I could do it,” Emmett said. “I knew I was going to make this transition, it had always been a goal. I just didn’t know when.

This opportunity to move to a more flexible schedule presented itself in 2017 with its first major staircase project, and Russellbilt moved from home renovations to custom projects.

“I started working for Stephen Rust, and he and I worked on the first staircase project,” Emmett explains. “I always say I was a packed snowball on the wrong hill, and he put me on the right hill and rolled over me. He believed in me, and that was all the fuel I needed. Stephen put me where I needed to be and believed I could do it, then I took the steps to do it, no pun intended.

As his opportunities began to grow locally, Emmett began showcasing his work on social media. After comedian and podcaster Joe Rogan started following him on Instagram, Emmett reached out and asked if he could build him a custom piece. The grandfather clock that Emmett shipped to Joe was visible in every podcast on YouTube. A year ago, Joe contacted Emmett and asked for a clock for his new studio.

“He yelled at me a couple times on the podcast for that,” Emmett says. “That word of mouth paid off so well. He asked to pay for the clock and I told him no. I got a full refund from shouting. He mentioned my name on the podcast, and when I had any things for sale on my website, everything was selling, he didn’t have to send me money.

His Instagram posts and videos have also connected Emmett to sponsorship opportunities. After contacting a company to inquire about some of their gear, Emmett says the owner started following him on Instagram and has since been sponsored by the company.

“I’m an ambassador for FastCut CNC, which makes CNC plasma machines,” says Emmett. “They sent me a CNC plasma machine that I use to cut my artwork and baseplates, and it allows me to do things much faster and more accurately. Before CNC, I did all the hand job. I’m a little dude from Missouri and I’m part of this family. This is a really cool social media opportunity.

In addition to financial benefits, social media has also connected Emmett to top talent and inspiration in the creator space.

“Jimmy DiResta started following me on Instagram,” Emmett says. “He’s famous in the maker world, everyone knows who he is. He reached out and told me that if I kept doing what I was doing, I was going to stand out. Hearing that from someone I admire was very motivating, and that’s exactly what I did.

Although he has achieved ultimate success – the ability to be there for Ethan – Emmett is touched by the people he has met along the way who have supported, encouraged, inspired and supported him by his family.

“I came here with next to nothing, I didn’t know anyone, and my kids have benefited so much from MU’s Women’s and Children’s Hospital,” Emmett says. “I was so lucky in Colombia, and that’s what’s so cool about the Gateway project.”