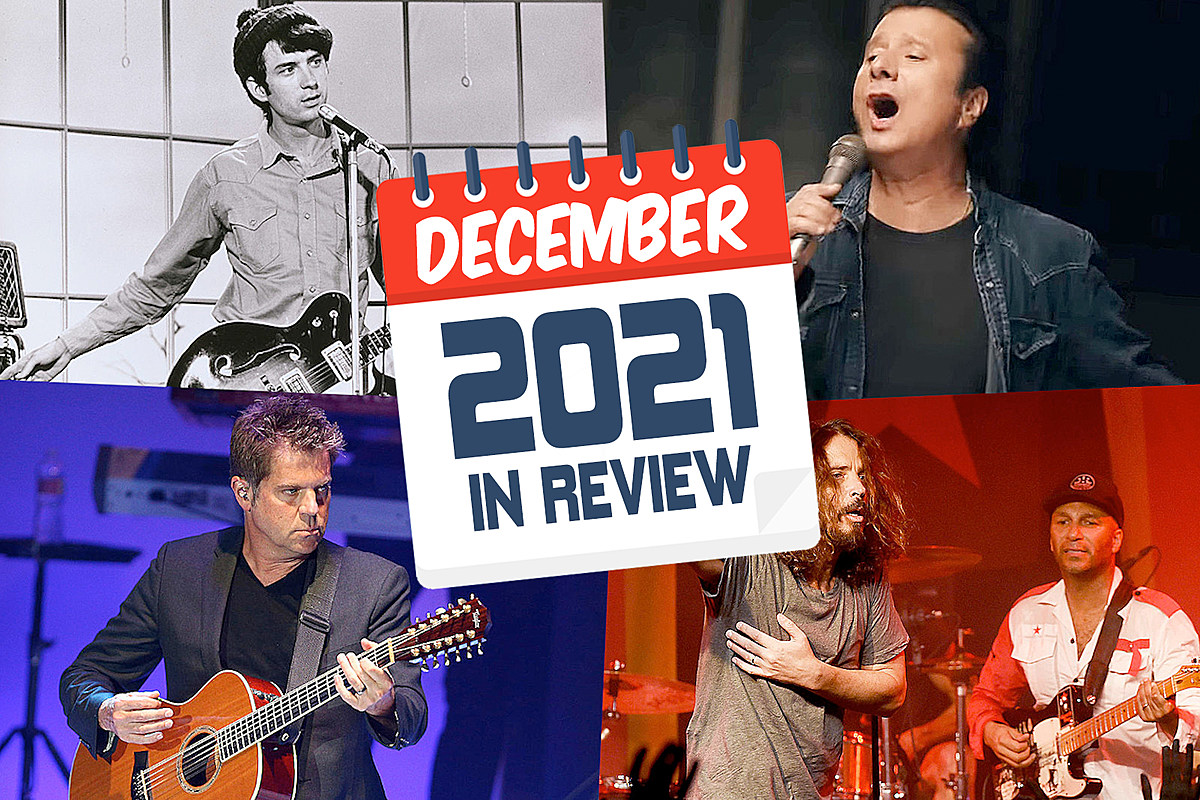 As 2021 drew to a close, December delivered the last twists of the year.

The death of Michael Nesmith – just a month away from the Monkees’ farewell tour – has saddened the music world, while Chicago has said much less permanently goodbye to one of its oldest members. Meanwhile, Neil Young and Tom Morello each reflected on their respective musical relationships, while former Journey frontman Steve Perry pondered what might be next.

Read on for a full rundown of December’s biggest headlines:

Death of Michael Nesmith
Less than a month after completing the Monkees farewell tour, singer, songwriter and band co-founder Michael Nesmith passed away on December 10 at the age of 78. The musician was reportedly determined to complete the last trip, despite his declining health. As news of Nesmith’s passing became public, many fellow rockers shared their condolences via social media, including Paul Stanley, Slash, Brian Wilson and Nesmith’s Monkees band member Micky Dolenz.

Neil Young looks back
In a December interview with Howard Stern, Neil Young discussed his departure from Buffalo Springfield and Crosby, Stills, Nash & Young. The rocker noted that in both cases his decision to leave came down to the same problem: He felt the bands “started to drift away” from why he first joined. â€œI haven’t broken with music; I have not broken with love. â€¦ I just wanted [the music] to be fed. I wanted to take care of it. If love was hurting because the situation was not right, I wanted to take the love somewhere else where it would be better, â€Young explained.

Chicago’s longest-serving guitarist resigns
After almost 27 years in Chicago, guitarist Keith Howland announced his retirement in early December. Howland’s decision was due to an accident that left him temporarily unable to play. â€œI broke my arm right before we were supposed to take the stage in Louisville,â€ he explained in a Facebook post. â€œI’ve been thinking seriously over the past few weeks and honestly about what my future might look like. I can’t play guitar right now, and it will probably be several months before I can get back to something normal. The rocker then revealed that “at this point I have decided to move on to the next chapter of my life.”

Steve Perry thinks about a residency
In an interview with UCR in December, former Journey frontman Steve Perry admitted that he “would love nothing more than to be on stage again.” To this end, the singer revealed that he has considered various scenarios, including some sort of residency. â€œThis has been discussed, but nothing has been put into place yet,â€ Perry revealed. “I’m a man of the moment. You never know – you might just see me in a nightclub singing a few Christmas carols.”

Tom Morello remembers Chris Cornell ‘one foot in the shadows’
In an interview in early December, Tom Morello returned to his friendship with Chris Cornell. Specifically, the Rage Against the Machine rocker recalled a dark moment that would later inspire one of his solo songs. â€œLong before Chris passed away, [there] It was a tumultuous time during which he was missing for a while, â€explained Morello. “In the middle of the night, after being missing for a month – or three months, or whatever the length of time – he texted me that said, ‘If you swallow a coin from the wishing well, your dreams come true. will become reality in heaven or hell. ‘ I used these lyrics as the centerpiece of this song for my friend who had one foot in the shadows. The track, titled “The Garden of Gethsemane”, later appeared on Morello’s 2007 LP. Revolution of a man.

Read more: Tom Morello says Chris Cornell had ‘one foot in the shadows’

In memory of the musicians, actors, producers and others who died in 2021.