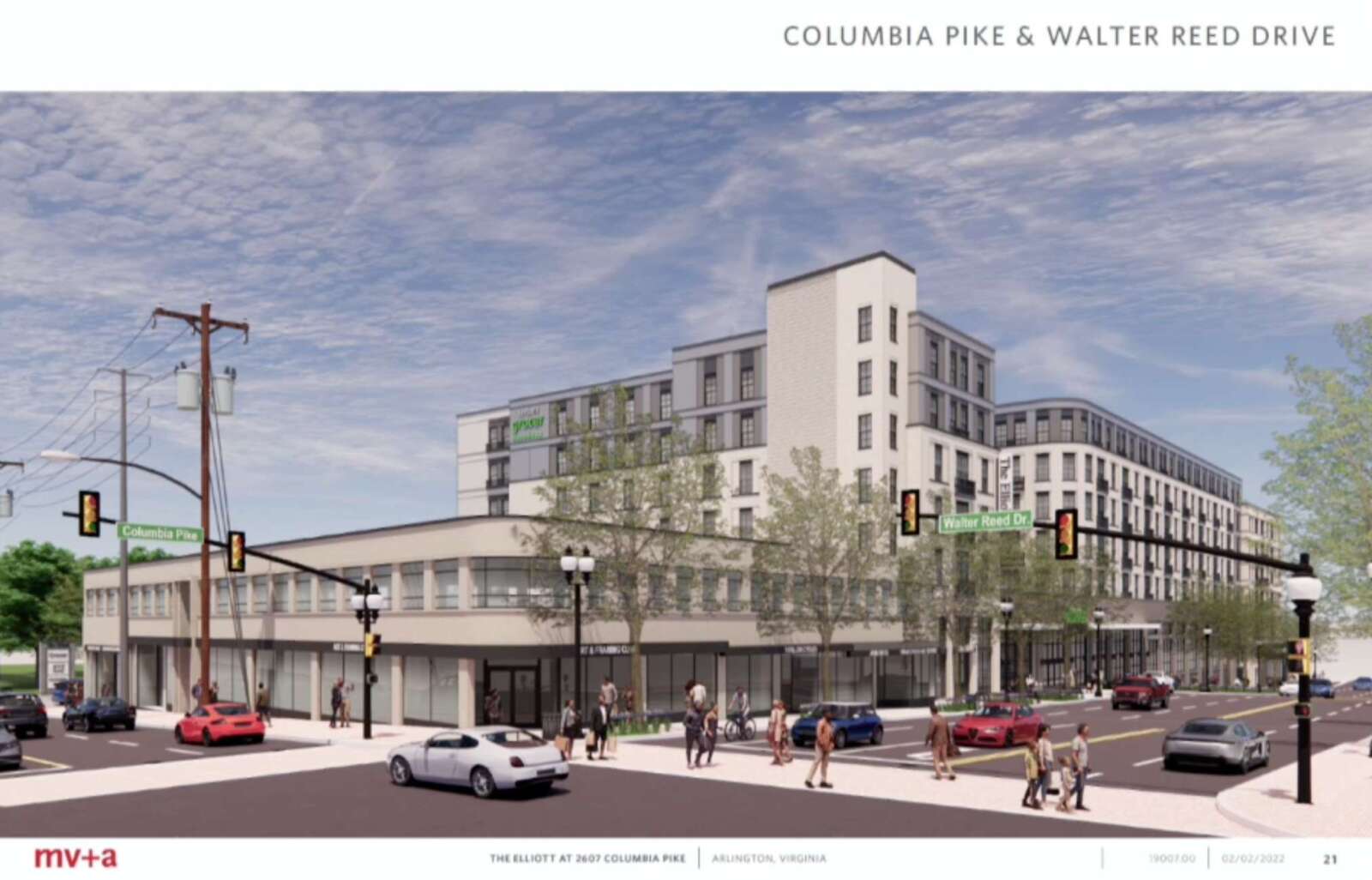 Now plans to replace an aging one-story building retail band in the 2600 block of Columbia Pike will head to County Council for approval at its recessed meeting on Tuesday, February 17.

Insight Property Group, based in Arlington, proposes to demolish the Fillmore Gardens shopping center at the corner of Columbia Pike and S. Walter Reed Drive and construct a multi-family building with retail on the ground floor. The six-story building, nicknamed “The Elliottwill place 247 apartments at market price above a grocery store (rumored be an Amazon Fresh), a renovated CVS pharmacy and three levels of basement parking.

“This project has been in the works for several years now,” said Tad Lunger, the land use attorney representing the project. “As you know, this is a very significant site in a downtown Columbia Pike, which has been envisioned to achieve a number of planning and community objectives. The achievement of these objectives has informed all aspects of this proposal. »

The developer will contribute land at the east end of the site to the second phase of Penrose Square Park. This will nearly double the size of the park and allow the two sculptures that make up the “Echo” public art installation to be further apart, as originally envisioned by its artist.

It will also construct a new S. Cleveland Street, which separates the park and the site, a pedestrian walkway along the western edge of the site, and a driveway to the north.

Residents will have access to four amenity spaces: two interior courtyards, a swimming pool courtyard overlooking the pedestrian walkway and a rooftop space. Insight Property Group is aiming for LEED Silver certification for the building.

Once engineering, construction and landscape plans are finalized, demolition could begin in early fall, said Erika Moore, spokeswoman for the Department of Community, Planning, Housing and Development, at ARLnow. If it starts on time, construction will likely finish in early 2025.

Members of the planning commission praised the project and asked a few questions.

“I’m excited about the presentation and I’m excited to see it moving forward,” said Daniel Weir, speaking not as Planning Commission chair, but as a member. “I’m also very happy with what was presented to us.”

That there were no public speakers and few questions shows how the Code based on Columbia Pike Form – which is guiding development on the Pike and favoring mid-rise apartments with ground floor retail – has helped deliver an “amazing building”, said Commissioner Stephen Hughes.

“Our long list of public speakers and fellow Commissioners who have poignant things to add is a big old goose egg,” he said. “We stand on the shoulders of giants who helped build the original plan and worked to ensure that the balancing act of many different areas was heard, communicated and then respected.”

The alley prompted a question from Commissioner Tenley Peterson, who referred to two car crashes involving alleys in November – one involving a toddler in Westover and the other an adult on a motorbike who died of his injuries — which prompted a county task force to study lane safety.

Transportation planner Jane Kim said her team wanted the driveway to be wider, but recognizes there are some limitations imposed by nearby structures.

“It’s definitely an intersection that we plan to watch for a number of reasons, including safety,” she said.

It’s one of three projects in the area the county can use to improve road safety, she said, including the recently relaunched Arlington Career Center expansion project and a redevelopment project. – road striping led by the department.

During construction, CVS would have to move its pharmacy services to a trailer in the existing parking lot, Moore previously said. The trailer will remain open until the project is complete, at which time CVS will move into the new building.

The mall’s other existing tenants move out of the space. An H&R Block was the most recent to close, following the Salsa Room in early 2020.

An incredible life for a quiet man | News, Sports, Jobs