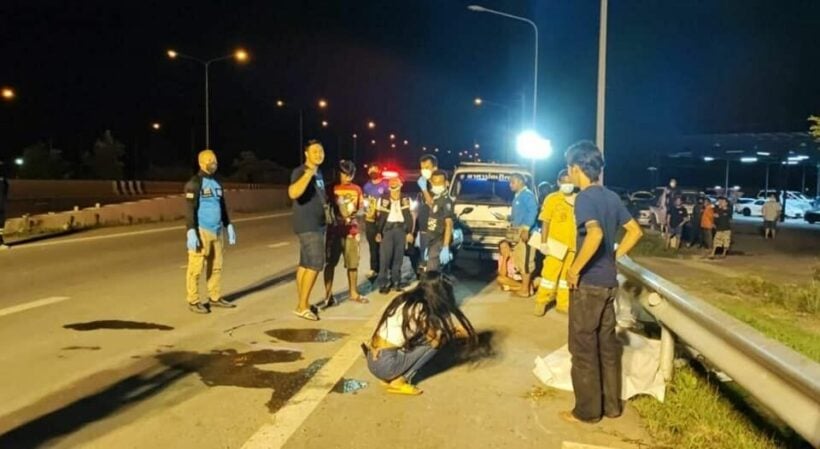 A teenager has died and another is seriously injured after a car accident in the province of Pathum Thani near Bangkok. Friends of the victims claimed a police pick-up was chasing them and ‘intentionally’ rammed into the victims’ motorbike, knocking them out of control and hitting a guardrail.

At 12.30am last night, officers from Lad Lum Kaew Police Station investigated the scene of the accident on New Ratchapruek Road outside a local garage in Pathum Thani. An 18-year-old woman, Amonrat Daengpong, was reported dead at the scene, and a 14-year-old man, Suthinan Mahingsa, the motorbike driver, was seriously injured and taken to hospital.

Friends of the victims, Nitipong Kaewwician, 27, and Napassorn Saetang, 18, who witnessed the incident, told police they were driving home in the Rama 5 area. , they noticed that a van was chasing them. They saw it was a police van, but the police didn’t turn on the siren.

Witnesses said the police pickup truck drove past the victims, then suddenly opened the passenger door and waved a baton on the left side. They said their friend tried to avoid the van, but the open door slammed into their motorbike, knocking them out of control and hitting a guardrail.

The garage owner also told police he heard a loud collision noise and saw a police van chasing the motorcycle. He insisted that the motorcyclist was not traveling at high speed at the time. The owner of the garage added that 3 policemen got out of the van and then disappeared when another group of policemen arrived on the scene.

Lad Lum Kaew Police Station Police Inspector Wiwit Prasertsom told Thai media that officers would interview the biker after he recovered and check nearby CCTV cameras to find the cause of the incident.

It’s about time you had a personalized internet homepage