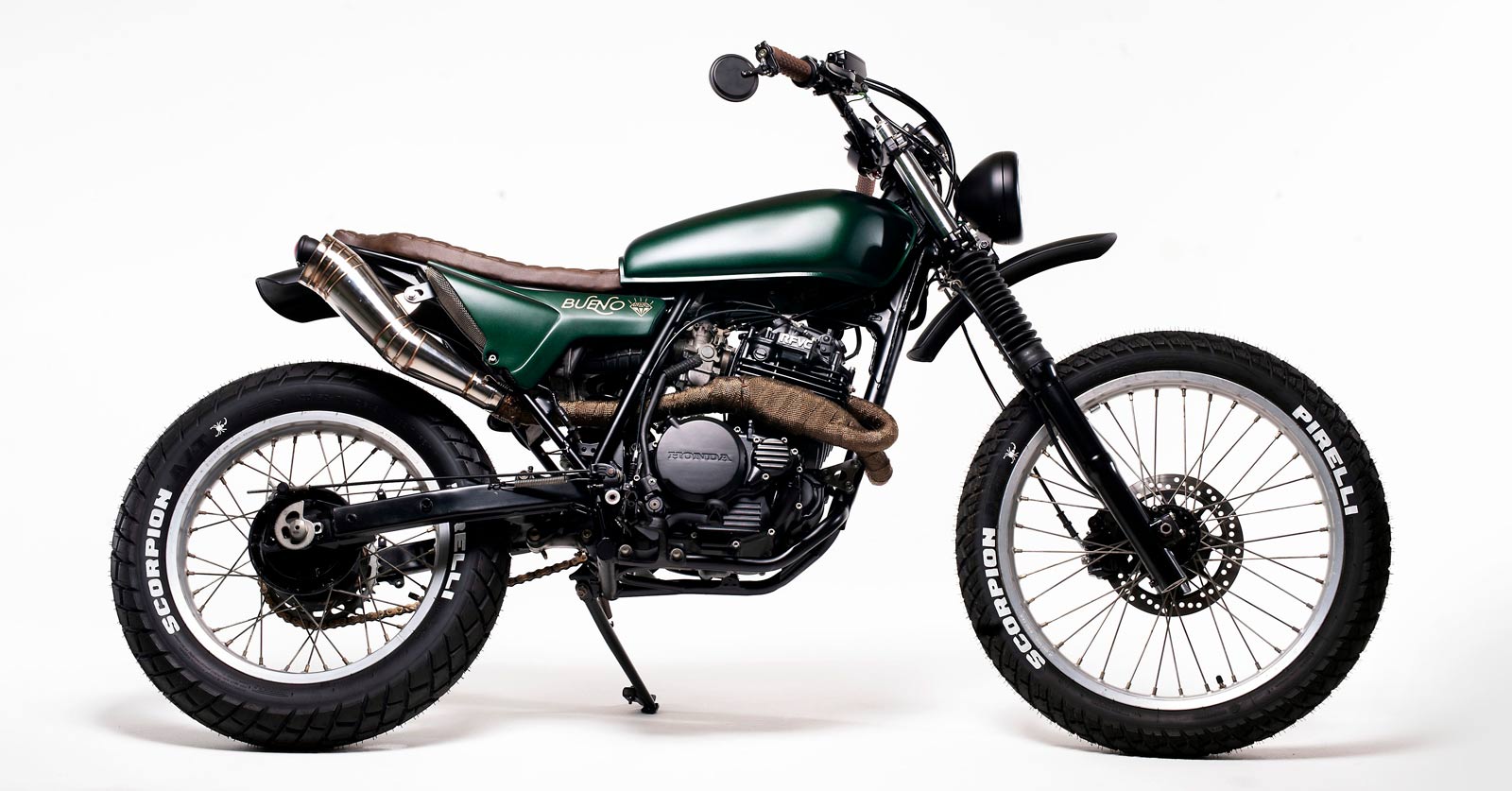 Honda XL350R from Bueno Co. Based in Fredericksburg, Virginia, USA, Nick Ghobashi is a freelance photographer who turned to custom bikes. And judging by that brave 1984 Honda XL350R scrambler, he’s having a blast.

The bike needed a good overhaul before Nick could start to change things. â€œI had to make a new retaining ring for the rear wheel bearing,â€ says Nick, â€œas they are non-existent for this year Honda XL models.â€

The frame was detached, the rear end was cut and looped, and the subframe brackets were welded, before everything was powder coated in satin black. The engine was also repainted and all fasteners replaced with stainless steel parts. Nick also revised the suspension, stiffening it at both ends.

The body is a mixed bag. Nick got a spare fuel tank and modified it to fit, then formed a fiberglass seat, which was then padded and covered with chevron-style pleats. â€œIt was made in a classic ‘cobra’ shape, inspired by the old choppers and bobbers I grew up around,â€ he tells us.

To build the new side covers, Nick cut out the originals, grafted onto fiberglass, and added stainless steel mesh. A pair of coiled aluminum fenders finish things off, with the front headlight and fender sharing a custom bracket. LED lighting at both ends keeps things on the street.

Other changes include modified exhaust manifolds with a standard muffler, modified wiring, and new handlebars, grips and footrests. Nick also made a slew of smaller mounts for the cockpit, like a new speedometer mount and a small control panel to hold custom switches.

The Honda is finished in a satin-metallic British racing green paint, with racing-inspired lettering on the tires. This little thumper is clean, full of attitude, and looks ready to rock. [Bueno Co.]

Kawasaki AR80 by Omega Racer The Omega Racer spare parts workshop and customs house, based in Bangkok, is celebrating its 10th anniversary today. So founder Markus Pintzinger decided to celebrate with a special build: a pint-sized 1982 Kawasaki AR80 cafe racer, with a donor that cost just $ 100.

Omega Racer specializes in custom parts for motorcycles like the Kawasaki W650 and W800, Yamaha SR400, classic BMW R series and Sportsters. â€œOur shop typically doesn’t make parts for the AR80 – the market is tiny and owners won’t spend hundreds of dollars on custom aluminum parts. So, from a business standpoint, choosing this bike was probably not the most logical or rational decision.

â€œIn a way, this bike is a ‘joyful function’ for me. It’s not only a bike to promote my business and showcase the amazing manufacturing skills of our team, but for me it’s also a great joy to express my creativity and personal satisfaction in bringing a bunch back to life. of rusty metal.

The Kawasaki was in pretty rough condition, so Omega Racer rebuilt the engine, soda-blasted the engine and frame, then sent it all over to Cog’n’Roll in Bangkok for powder coating. Markus opted for a tropical green tint on the frame; “very suitable for Thailand and the Kawasaki people.”

The donor’s bike came with non-OEM spoked wheels, but the originals are rare and expensive. So the team bought a pair of replicas. Thanks to the new wheels, a disc upgrade could also be done, although the AR80 is not fast enough to need it. The rear shock was beyond repair, so Markus traded it in for a new one from NOS.

Omega Racer took inspiration from the 50cc Italian street and racing bikes of the late 60s and 70s for the bodywork. â€œWe love these bikes, which have super long and narrow fuel tanks, tiny seats and huge stances,â€ says Markus.

Each piece was sculpted with foam and then taken to the store’s benchmark maker, Korn, to be shaped out of aluminum. Perceptive eyes will spot two plugs on the tank, this is because it contains fuel and oil tanks. The rear duck tail kick is also a neat touch, and a slit design pattern echoes on parts such as the swingarm straps, steering neck, and front fairing.

There is an additional detail on the top of the tank: a tribute to a friend of the store, Angelo, who sadly passed away earlier this year.

This mini cafe has now grown from 80 kilos to around 48 kilos, so it has been dubbed Cavalleggero, which means “light cavalry” in Italian. â€œIt seemed like a fitting name for such a light, but slightly horse-deficient bike,â€ jokes Markus.

The Kawasaki KX100 Land Speed â€‹â€‹Racer by Mikey Hanrahan Mikey, 24, has spent the last five years on what he calls his science experiment: building and fine-tuning this low-loader Kawasaki KX100 to compete in the Bonneville Salt Flats and El Mirage. And that’s exactly the kind of project that we can support.

From a 1998 KX100, Mikey did all of the work himself, in his garage. It started out as a lowered and stretched off-road bike, but then he decided to go all out and make a semi-rigid rear triangle specially designed for it. He now sits 14 inches lower and has been stretched two feet.

Up front is a set of Yamaha PW50 forks, running on custom springs and held in place by custom yokes. At the top is the bare minimum of hand-crafted aluminum bodywork. The riding position is dedicated, with incredibly low clips and rear assemblies hanging from the rear frame gusset.

Mikey built the engine with the KX lower end and 2014 KX upper end with larger ports, an air change kit, a 32mm Mikuni flat carburetor, and a handcrafted exhaust system. It also “removed all parasitic parts from the engine” so there’s a total loss electronics, an electric water pump, and more starter kit.

The NCCR took inspiration from Ducati’s legendary Supermono, where the rear cylinder was removed and a swivel lever and connecting rod installed in its place as part of a counterweight system. But the NCCR single does not use a Ducati 888 engine. Instead, they based their super single on the Rotax Helicon 1125 and EBR 1190 engines.

They did away with the front cylinder instead of the rear cylinder, for a multitude of reasons. The NCCR says it improves ground clearance, narrows the silhouette of the bike, and optimizes airbox positioning, among other things.

The new engine has a capacity of 562 or 595 cc, with big bore options from 660 to 700 cc. It is designed to work with a fuel injection system, but there are plans to offer a carbureted version as well.

The PRN thinks the motor would be ideal for an enduro bike, so that’s what they’re working on right now. The target weight of the prototype is 160 kilos [353 lbs], with a power of 70 hp. It will be built for the distance, with a rally-style fairing and luggage attachment points.

And if that doesn’t appeal to you, the NCCR reckons the motor will be perfect for a track racer as well. [NCCR | Via]

Beachman ’64 Electric Bike Beachman is a Canadian startup founded by Ben Taylor and Steve Payne, and they’re all about classic-looking e-bikes. You’re looking at the ’64: a new model from Beachman that’s close to wrapping up a crowdfunding round, but has already surpassed its target.

â€œKeeping an eye on the past, we’re working to combine the rugged, clean styling of a ’60s cafe racers, with the light fun and carefree convenience of a’ 70s Honda Cub,â€ says Ben.

The ’64 uses a frame design based on the Honda CB125, although this prototype was built with a similar Kawasaki KZ200 frame. It is equipped with commercially available forks and shocks, as well as 18-inch wheels with disc brakes. There is a classic Yamaha-style fake fuel tank on top to cover the electronics and an interchangeable bench seat in the back.

It is powered by a 72V brushless hub motor, with a removable 40Ah battery that can charge to 80% in three hours. It weighs 220 lbs and is capable of 60 km / h, but can also be specified as an â€œelectric bike,â€ with pedals and a limiter to keep it below 32 km / h. The range is estimated at 90 km with a full charge.

An ’64 will set you back $ 4,200 in Canadian dollars and is only available in Canada at the moment, with plans to expand into the US in 2023. Would you be tempted? [Beachman]