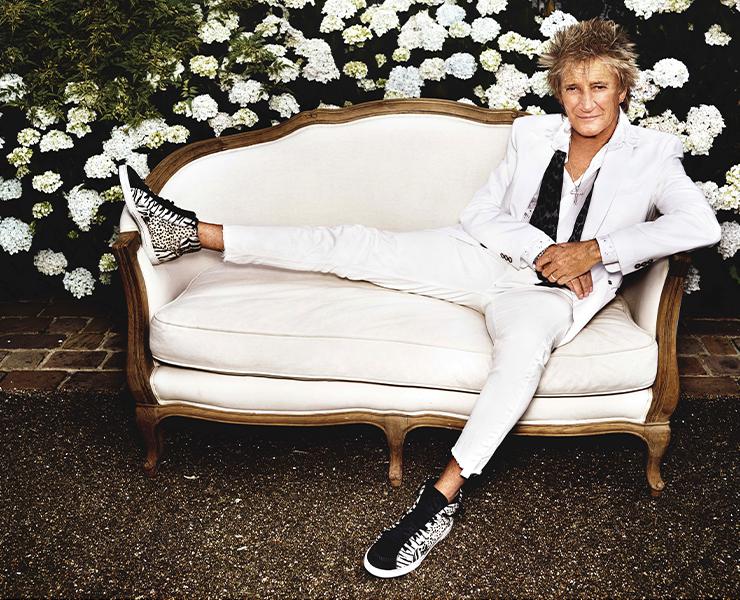 Rod Stewart was nicknamed “Rod the Mod” early in his career, but that was more rhyme than reason. He’s more the ultimate boy than a symbol of the sleek London swinging scene of the mid-60s that spawned The Who and Small Faces. Young Stewart was stylish but more interested in football and raising a pint with friends. As a singer, he established himself with the band Jeff Beck before following his own muse for more than five decades.

He took the 70s superstar in stride and created a body of work that he revisits with each performance of his residency at the Colosseum. To date, according to Pollstar, Stewart has performed “Maggie May” more than 1,500 times in concert. There are 1,420 performances of “Tonight’s the Night (Gonna Be Alright)” recorded, nearly 1,400 of “You’re in My Heart (The Final Acclaim)” and over 1,300 of “Da Ya Think I’m Sexy? “Hot Legs” has been released at least 1,230 times to the public.

Stewart first embraced beatnik culture and transitioned into mod culture, cultivating his spiky, crepe hairstyle during this time. He dressed in style when he started sitting with bands and learned to play the harmonica, but once he discovered R&B and learned that his vocal range was the same as Sam Cooke, his clothes took precedence over performance. Stewart has continued to cover Cooke hits such as “Twistin’ the Night Away” and “Bring It on Home to Me” on her solo records, and performed “Having a Party” at her most recent gigs.

Before signing his first solo contract with Mercury Records, he became the lead singer of the band Jeff Beck, where Beck was the focal point. Stewart honed his raspy vocal style on two JBG records before leaving with bandmate Ron Wood to form Faces with bassist Ronnie Lane, keyboardist Ian McLagan and drummer Kenney Jones of Small Faces. The mod look gave way to madness, and Faces became the best unassuming rock band of their time. Their hit “Stay with Me” was part of the Stewart’s Colosseum concert setlist in 2020.

Stewart had a solo contract during his time with Faces and hit his stride with the third album Every photo tells a story. In addition to “Maggie May”, he cut Tim Hardin’s cover “Reason to Believe” and “The Killing of Georgie (Part I & II)”, which were among his most recent sets. He recorded “Twistin’ the Night Away” on the next album, 1972 Never a dull momentwhich also featured a cover of “I’d Rather Go Blind” and “You Wear It Well”.

Both songs were part of his last concert at Caesars Palace in October, along with the Faces song “Ooh La La”, originally sung by Wood. Stewart reunited with Wood and Jones last year to record new material, but until he appears, Stewart is happy to perform the song live and provide a good time for everyone.

Click here for your free subscription to the weekly digital edition of Las Vegas Magazine, your guide to everything to do, hear, see and experience in Southern Nevada. Along with the latest edition emailed every week, you’ll find plenty of great, money-saving deals on some of the most exciting attractions, restaurants, properties and more! And Las Vegas Magazine is packed with informative content like restaurants to visit, cocktails to sip and attractions to enjoy.