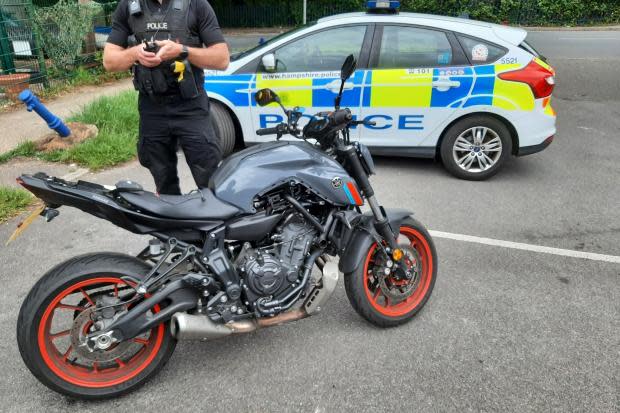 A VEHICLE has been located in a Southampton area just six minutes after it was stolen.

Officers were called to an area behind the Coxford Community Center on Olive Road just after 7pm last night.

It came after reports that a motorbike had been stolen in the area.

But just six minutes later, the bike had been recovered.

A suspect was seen with the stolen vehicle, but after being approached by police drove away.

Another suspect, who was driving a white moped, also fled.

Now the force has spoken out after a group of young teenagers alerted the suspects so they had time to get away.

“Special thanks from us to the group of young teenagers who alerted the bad guys to our approach.

“This could constitute an offense of obstructing a police officer in the performance of his duties. I can knock on this boy’s door to explain the offense and how he committed it. I would very much like to know why he wanted to help the bad guy to escape.

“A large and powerful motorbike has been recovered and returned to its owner. It has some damage but nothing that cannot be repaired.

“Best advice – invest in a tracker for your bike. The owner of this bike said the investment was worth it. Having been reported stolen for six minutes with only minimal damage, I agree”

A message from the editor

Thanks for reading this article – we appreciate your support in reading the Daily Echo.

Subscribing to the Echo means you have unlimited access to the latest Saints news, features and coverage – all with a lightweight advertising website.

You will also have full access to Saintsmoreyour new home for Southampton FC tactical analysis, features and more.

Don’t take my word for it – subscribe here to see for yourself.