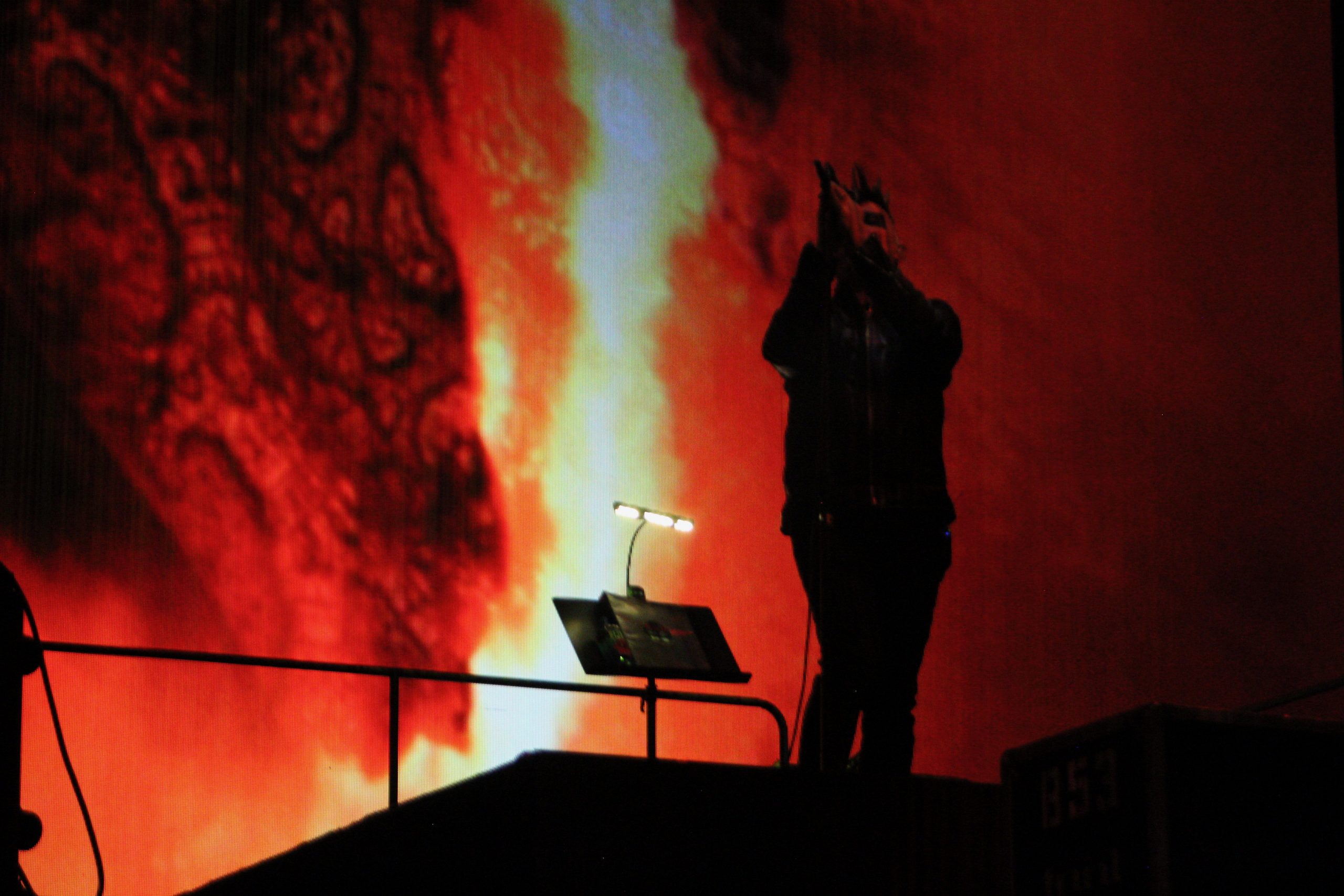 After hours of melting the minds and faces of ecstatic onlookers, Tool drummer Danny Carey is back on his drums. Carey – sporting a King jersey – was the first member of the band to return to the crowd for a three-song encore. Although most often frontman Maynard James Keenan gets the most recognition, Carey got the biggest response of the night as he opened the curtain with several minutes of live programming beats and furious jamming.

More than 17,000 votes reached chaotic heights as Tool took the stage at Golden One Center on January 15. The band were returning to Sacramento for the first time since their Aftershock performance in 2019, now joined by opening act Blonde Redhead. Sacramento was the fourth leg of a 54-date tour across the United States and Europe. That time lapse between Tool’s Sacramento visits isn’t unusual, but for more than two years the band has had a non-existent performance schedule thanks to the music industry’s greatest enemy: COVID-19.

At the start of the evening, after mesmerizing the crowd with “Spring and by Summer Fall,” Blonde Redhead singer Kazu Makino greeted everyone with her arms raised and a wave. “It’s huge! It’s huge! I know,” she said, looking over the vastness of the stadium. “I’m sure none of you know us. a great opportunity for us. We thank Tool and thank you.

The New York band – made up of Makino and brothers Amedeo and Simone Pace, guitarist and drummer respectively – hasn’t set foot in Sacramento since Launchfest 2013.

Tool often co-stars with artists like Blonde Redhead. Over the course of the band’s career, it has built its live show to showcase its own talented members — Keenan, Carey, bassist Justin Chancellor and guitarist Adam Jones — but also the incredible psychedelic art that has become iconic to his image. Jones, who received birthday greetings from Keenan during the band’s “Opiate” performance, is largely responsible for the art used in much of the band’s album covers and packaging.

In 2019, Tool released “Fear Inoculum”, their first studio album in nearly 13 years. Audiences at the Golden One Center were treated to six songs from this collection, including the studio recording of this album’s opener, “Litany Against Fear”. As the band took the stage, the instrumental track played, accompanied by a projection of Alex Grey’s “Study for ‘The Great Turn'”.

Gray mixes sacred geometry and fractals found in nature with shimmering colors – a well that Tool often returns to when developing his live performance visuals.

Almost drowning out Keenan’s own voice, a virtually sold-out crowd joined him for every word of notable favorites “Pushit”, “The Grudge” and “Hooker with a Penis”. Many superfans stayed on their feet for the entire show, raising their arms in the air to give a middle finger in solidarity with Keenan or enthusiastic bull horns (because… Tool rocks). The anti-establishment message in many of Keenan’s lyrics has moved decades of like-minded rockers.

The band’s Sacramento audience was treated to an exclusive performance when, for the first time live, Tool performed “Culling Voices,” a track from their most recent studio effort. In the middle of this 10-minute song, millions of pieces of confetti took flight, blasted into the crowd from the rafters of the venue. Joy erupted from the crowd, delighting many who said they were inhibited by more than just alcohol. Hands raised in the air in an effort to capture bits of the colorful material raining down on the crowd.

On the morning of Tool’s performance in Sacramento, ocean levels rose along the California coast due to the eruption of the Hunga-Tonga-Hunga-Ha’apai volcano near Tonga. A member of the crowd joked about the exclusion of the song Ænima from the evening’s setlist. In it – a track from Tool’s second album – Keenan sings “Learn to Swim” and confesses to “praying for tidal waves”. The ticket holder couldn’t decide if he would have found the situation ironic or wishy-washy, but laughed as he admitted: “I think people would have noticed. I love that song, but I’m glad they didn’t play it today.

People exiting the Golden One Center were visibly impressed with the night’s entertainment. An outgoing fan noted that Keenan’s ability to connect with audiences has improved dramatically since seeing the band perform live in 2016.

“He wore a motorcycle helmet all night long,” the lucky participant recalled for SN&R. “I found myself staring at the visuals and not even noticing the band. It’s so much better. It’s like they’re back in their true form. I much prefer Mohawk-Maynard.