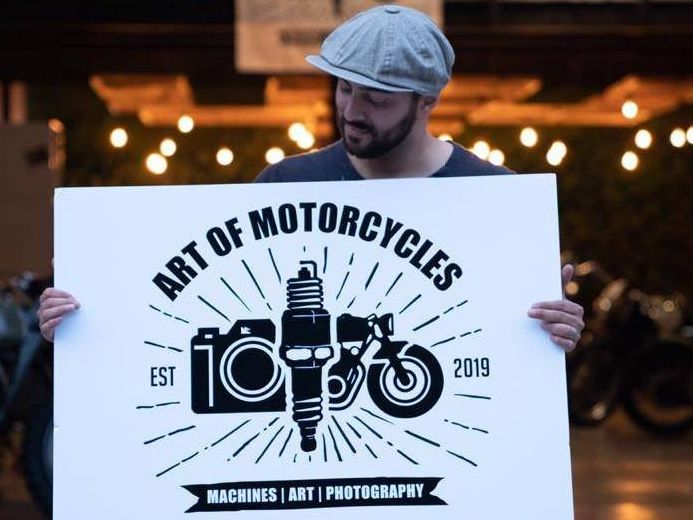 As the first rays of the sun light up the sky, Del Gasan moves through the Silent City.

The streets are empty, the morning mist swirls around the ominous skyscrapers, and the world sleeps – until the Junkyard Dog begins to growl.

Gasan isn’t a morning jogger, avid commuter, or sympathetic dog walker – he’s a biker, and the beast in question is his custom Harley Davidson chopper.

For Gasan, 38, motorcycling has been a long-standing obsession that has only intensified over the years. â€œMy grandfather loved bicycles,â€ he says. â€œHe made old British bikes and my dad was passionate about rocking, so it was inevitable that when I grew up I also liked bikes.

â€œI got my first bike when I was 17 and built it myself. When I moved from UK to Dubai eight years ago, I took it with me. After I arrived I realized that there weren’t any bands where people could hang out and really immerse themselves in the motorcycle scene, so I started to create one myself.

This is why Gasan created the Cafe Racers Middle East motorcycle club in 2013, to bring together like-minded people from different cultures and origins.

Today, he has over 11,000 members from across the Middle East, the most recent of which is his 3-year-old daughter Ava, who is already fascinated by the family’s horses.

â€œThe Cafe Racers Club was the very first space of its kind for bikers to come together in the UAE and the motorcycle scene has just exploded since then.

“It’s amazing to see the diversity of people who come on our rides and attend the event and I can’t wait for Ava to be old enough to ride with me – she is definitely a baby biker.”

Following the success of Cafe Racers, Gasan launched The Art of the Motorcycle in 2019 and is currently preparing for the third event on Friday and Saturday November 5 and 6 at the Warehouse Four in Al Quoz.

The huge meet, which is free, will draw thousands of bikers from across the Middle East to Dubai for a massive celebration of custom bikes, art and photography.

The shows have a deep personal meaning for Gasan. â€œAt the end of November 2019, my father died, I had been made redundant and my daughter had just been born, so I was trying to take everything into account,â€ he says.

â€œI have always been passionate about cycling, art and photography, so I decided to put on a show as a kind of tribute because there was nothing else like it in the area.

â€œI hopped on my bike and went to all the cafes and biker garages that I knew and asked everyone to get behind.

“The first year it totally blew up and we blocked off half of Alserkal Avenue with motorcycles and the second year we attracted some really big sponsors like Breitling, Harley-Davidson and Vespa.”

I recently started meditating and found that riding a bike is so close to that feeling, because you are in the moment, you are focusing on breathing and stopping

Each year, Gasan organizes 20 to 25 custom motorcycles and selects 10 artists and 10 photographers to present motorcycle-related works at the free event.

There is no one in town better qualified for the job.

In over 20 years of building custom motorcycles, Gasan has gained worldwide recognition, winning numerous contests and appearing on the pages of international motorcycle magazines.

â€œMy first bike was a 2006 Triumph that I built myself and won many awards,â€ he says. â€œMy second was a 1961 Matchless that belonged to my grandfather, then it went to my uncle, then it passed to me.

â€œMy third and current bike is the one I had the week my daughter was born and it’s a Harley that I turned into a chopper.

“It’s kind of a 70s raggerty bike called The Junkyard Dog and it’s a labor of love to say the least.”

Gasan certainly benefits from this feeling of liberation.

â€œThere are two rides that come to mind: the first was when I got to the UAE and went down Al Khail and to my right was the desert dunes and to my left was the Burj Khalifa. It was something that I will never forget.

â€œMore recently after the lockdown it was announced that we could go out and I remember pushing my bike down the street at 6am and the second the clock struck I was free.

“I am delighted to be back to doing what we love on such a large scale and this year’s event is a celebration of it.”

For Gasan, nothing compares to the freedom to ride and his favorite route is in the middle of the action.

â€œI love flying through town,â€ he says with a smile. â€œI love crossing bridges and tunnels because Dubai is constantly changing and there is always something being built. It really makes you feel connected to it all.

â€œPeople say it’s like therapy, but it really is. I recently started meditating and found that riding a bike is so close to that feeling, because you are in the moment, you are focusing on breathing and stopping.

This year, Gasan promises the show will be bigger than ever with live activations, helmet painting, live music, huge giveaways, and a collection of painstakingly personalized bikes.

Art and photography are sourced from around the world and everything is for sale at the show with any excess going to the Autism Awareness Show.

â€œIt’s really a family event, hosted by me, my wife, Anneka and Ava, of course, and we all run around the show that day.

“I just try to bring people together and have fun doing it and the more motorcycles the better.”

More information is available at www.aom-show.com

Here’s what we love about the Toyota RAV4 Prime